(Doha, Qatar)–Relief and pure joy were two emotions on wide display on Day 3 of the 2013 World 9-ball Championship,  as 32 players booked their spots into Wednesday’s Final 64, the single elimination knockout phase that signals the real start of pool’s most prestigious event.

Relief came from those top players who just wanted to notch their second win and put the madness that can be the group stages behind them. Pure joy came from the other players, those that know that winning this tournament is a massive long shot, and just getting through to the big dance is a career defining moment in itself.

The 128 player field that began here on Saturday was already considered by many to be the strongest ever gathered for this event. As the wannabes wither and the main stage starts to take shape, the remaining field promises to offer a brilliant collection of cue artists from all corners of the globe. It’s the kind of shot in the arm the sport of pool needs.

Today’s play inside the Al Arabi Sports Club in Doha was given over to only winners’ side matches. Winners advanced to the Final 64, while losers were sent over to the losers side of their group brackets, where they will play for one more chance tomorrow on Judgement Day.

Middle Eastern pool once again shined brightly in the form of Omar Al Shaheen. Any lingering doubts about the authenticity of Al Shaheen’s pool genius, which he’s proudly displayed over the last year, were surely put to rest today as the 21 year old Kuwaiti laid waste to the Philippines Marlon Manalo, 9-1.

Manalo’s making a bit of a comeback after a three year hiatus, but anyone who knows this sport still considers the Filipino a true monster out on the floor. That didn’t seem to bother Al Shaheen  as he looked like he was having a stroll along the blue waters of the Gulf.

“I broke the balls good and always had a shot after the break,” said Al Shaheen. “He break the balls bad and can never see a ball.”

Can Al Shaheen go all the way? The university student who studies sports psychology is a long shot for sure, but his odds are definitely improving quickly. He reached the last 16 here last year and fought bravely in going out to eventual runner-up Li Hewen of China. In May of this year, Al Shaheen reached the semi-finals of the China Open in Shanghai, one of pool’s major events. He seems to be the man of the moment, and he’ll have the chance to prove it beginning Wednesday.

Defending champion Darren Appleton wore a smile of relief today after beating Korea’s Jeong Young H, 9-5. Like other favorites here, Appleton revealed that the two stage format had been playing tricks on his mind. You know you should win, but you could very easily find yourself sliding down a vortex of negativity if you’re not paying attention.

“I was worried because if I lose I have to play Efren(Reyes),” Appleton said. “With all the Filipinos here that’s like playing in front of his hometown crowd. But if you come here to win this tournament you can’t think about who you’re going to play.  I made a few silly mind mistakes, like taking it easy when I was up 6-2. But I had 70% break and run outs. I played pretty well and I’m happy. I just wanted to get through to the final 64.”

Two of Taiwain’s heavyweights, Chang Jun Lin and Ko Pin Yi, came through with nothing to worry about. Chang crushed Spain’s Marc Claramunt 9- 1, while Ko had an easy time with Qatar’s top player, Waleed Majed, 9-4. Another Taiwan player who always seems to play under the radar but who can do some serious damage is Cheng Yu Lung, who held off Great Britain’s Chris Melling, 9-5.

The Philippines came out with a mixed bag today with four players advancing and five being swept over to the losers side. World number 2 Dennis Orcullo breezed past Poland’s Tomasz Kaplan, 9-4, to qualify. Antonio Gabica quietly remains one of the stronger Filipinos in the massive contingent of greats the country produces.  Gabica has lived in Qatar for four years now working as an assistant coach for the Qatar national team. Gabica even wears the colors of Qatar while playing. But his game and heart are true Filipino, something Germany’s young Dominic  Jentsch discovered today. Gabica won 9-7 to advance.

Completely unheralded Filipino Marlon Caneda was the surprise of the day with a 9-0 trouncing of tough Greek player Nick Ekonmopoulos. The 30 year old Caneda has a hard luck story that makes it difficult not to root for him. He has spent the last four years working as a house pro at the Run Out pool club in the remote Saudi Arabian town of Sakaka Aljouf. Caneda earns a mere $700 a month which he uses to support his child, mother and sickly grandmother back in the Philippines.

The lonely hard scrabble existence has its upsides for Caneda, though. He practices up to 12 hours each and every day.

World number three Lee Vann Corteza found himself in a back and forth dog fight with Albania’s Nick Malaj. The 26 year old Malaj, who currently lives in Athens, is no longer the upstart he was last year when he burst onto the scene here in Doha. Fighting toe to toe with Corteza, Malaj came back from 8-7 down to shock the Filipino and advance, 9-8.

“That’s the third time I played him and the first time I beat him,” a drained but excited Malaj said afterward. “If I lose to the same guy three times, that’s no good. And Filipinos are good players so I feel like a massive weight has been taken off my shoulders.”

China’s Wang Can will be seeing action on Wednesday as well. Wang made waves in the US earlier with a semi-final finish at the Ultimate 10-ball event. He continued his fine run today easily beating the Philippines Ramil Gallego today, 9-1.

One player everyone has their eyes squarely glued on is former World 9-ball and World 8-ball champion Wu Jia Qing(formerly known as Wu Chia Ching.) Wu, who only last November returned from spending two years in the Taiwan military scrubbing toilets and floors and never touching his cue stick, continued what looks to be a very serious comeback to the top echelons of the sport, after he reached the semi-finals of the China Open in May. Today, Wu, who now lives in and plays for China, looked impenetrable as he defeated a very strong Karl Boyes of Great Britain, 9-4, to qualify.

One of the best feel-good stories of the tournament so far continued again today as Chile’s Enrique Rojas did something that hasn’t been done since his countryman Alejandro Carvajal in 2006; he qualified for the knockout stage of the world championship. The 35 year old Rojas played in this event in 2005, 2006 and 2007 but never advanced past the group stage. Two days ago he upended heavily favoured Li Hewen of China 9-6. Today Rojas beat Aloysius Yapp of Singapore by the same score to finally enter the round of 64 on Wednesday.

32 more matches are on tap Tuesday with the appropriately titled Judgement Day.  Nerves and drama are sure to be cascading throughout the Al Arabi Sports Club as every match is win-or-go home and careers could be hanging in the balance.

*The World Pool-Billiard Association(WPA)  will be on hand in Doha throughout the week bringing you all the drama from the 2013 World 9-ball Championship. WPA Press Officer Ted Lerner will be reporting from the Al Arabi Sports Club with daily articles containing insight, interviews and analysis, as well as photos. Ted will also be manning the WPA Facebook page and Twitter feed and responding to fans queries and comments. Fans can also follow all matches via the WPA live scoring platform.

*The 2013World 9-ball will be held in Doha, Qatar from September 2-13,2013 and is sanctioned by the World Pool & Billiard Association(WPA), the world governing body of the sport of pocket billiards. 128 players from across the globe will compete for the biggest prize in Men’s Pool. The 2013  World 9-ball Championship is a WPA ranking event.

Final Group Matches For Tuesday, September 10
Winners advance to round of 64. Losers are eliminated

RESULTS FROM DAY 3
ALL MATCHES WINNERS SIDE.
WINNER ADVANCES TO ROUND OF 64, LOSERS GET ONE MORE CHANCE 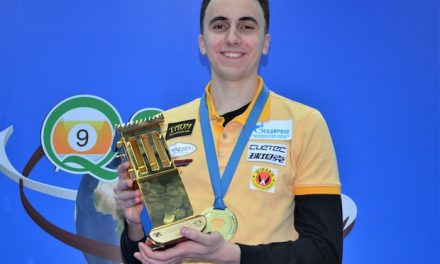 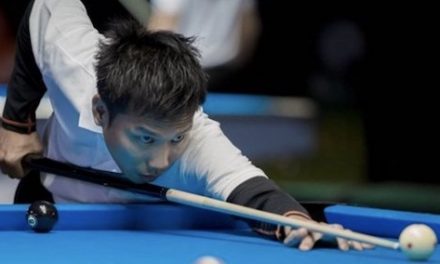 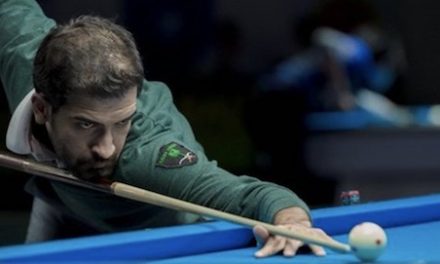 THE MIDDLE EAST RISES ON THE WORLD STAGE 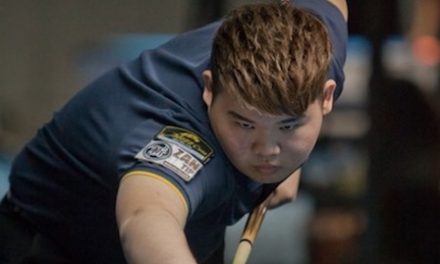