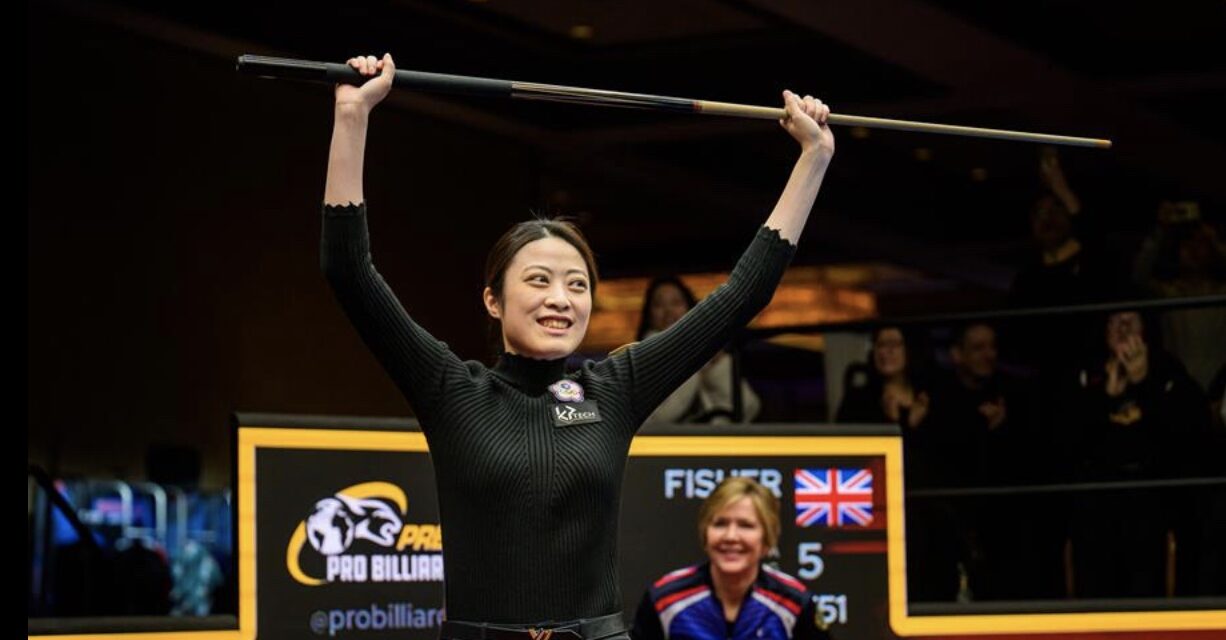 Over the last six months, Chieh-Yu Chou of Chinese Taipei has put together a pretty impressive resume.

After earning a silver medal for her runner-up performance at last year’s World Games in Birmingham, Ala., she won the second-annual Predator World Women’s 10-Ball Championship in Austria, besting fellow countrywoman Tzu-Chien Wei in the finals with a commanding 9-3 performance.

Playing in the championship match of this weekend’s Kamui WPA Women’s World 9-Ball Championship, she somehow managed to top that performance, taking advantage of a couple of opportunities left by Allison Fisher early and blanking her opponent, 9-0, at Harrah’s Hotel and Casino in Atlantic City. Chou, who earned $30,000 for the win, becomes the first female competitor to hold the world titles in both 9-ball and 10-ball since Kelly Fisher in 2012.

“I’m very excited and it’s like a dream,” said Chou after the match. “The last 16 I thought I was going to lose and I won 9-8. I feel very lucky. I focused and continued my game so I’m really happy.”

After Chou climbed onto the scoreboard first with a victorious safety exchange in the first rack, the Fisher had a chance to even the score but missed a sharp cut on the 9 ball. Her opponent clicked the ball in to take a two-game lead, then broke and ran twice to increase her advantage to 4-0. Fisher returned to the table in the fifth game when her opponent failed to pocket a ball on the break but couldn’t find a clear shot at the 1 ball and opted to exchange safeties, which Chou took advantage of when her opponent left an open shot. Chou cleared the table then broke and ran twice more to increase her lead to a commanding 7-0.

That’s putting it mildly. She used another victorious safety on the 6-ball to climb onto the hill then used a tight cut shot on the 1 ball in to the side pocket to break to break-and-run once more and close out the championship match in a lightning fast 49 minutes.

“If you had asked me at the beginning of the week if I would like to be in the final, I would be quite pleased with it,” said Fisher. “No one wants to lose nine nil, but I couldn’t do anything about it.”

The victory ended the surprise run by Billiard Congress Hall of Famer Fisher, who had become a bit of a sentimental favorite after reaching the quarterfinals and pulling off an upset of young Filipino Chezka Centeno Saturday night. Playing another rising young star in Russia’s Kristina Tkach in the semifinals, the two competitors split the first 10 games until Tkach rattled the 5 ball in the corner pocket. Fisher cleared the table, then used a safety to force her opponent into a foul and tacked on a break-and-run to pull within one rack of the win.

After Fisher failed to pocket a ball on the break, the Russian attempted to pocket the 1 ball in the side and missed. After Fisher followed that miss with a foul after attempting to kick at the ball, Tkach worked her way through the balls and, with the 9 ball hanging near the corner pocket and the 6 and 7 balls further up the rail, elected to try a combination shot and missed. Fisher approached the table and began pondering her next shot but, failing to realize she had already used her time extension, was forced to drop, aim and fire at the ball as the shot clock was about to expire. She missed and Tkach began clearing the table but missed a makeable 9 ball in the corner pocket, allowing Fisher to rattle the ball into the corner pocket for the victory and a ticket to the finals.

Chou reached the finals by erasing an early deficit to South Korea’s Seo Seoa in the first semifinal of the day.

After taking an early 2-1 lead, Chou missed a jump shot on the 3 ball in the fourth rack. Seoa took full advantage, clearing table and winning the next five games to grab a 6-2 advantage. Standing at the table in the ninth rack, the South Korean attempted a safety on the 1 ball that left an opening which Chou walked directly through, winning three straight to cut the deficit to 6-5 before missing the 5 ball in the 12th rack. Seoa tacked on another win but left another opening in the next rack that allowed her opponent to see the 3 ball after a safety. Chou connected with the ball, then watched as the cue ball knocked the 9 ball into the corner pocket to pull within a game again.

“When I saw that ball, I thought there might be chance,” said Chou. “When I made that I said, “okay, my luck is coming. That was a turning point.”

Chou broke and ran twice to take the lead then used a safety exchange on the 1 ball to close out the match.

You can rewatch all feature matches on @worldbilliardtv on YouTube, or on Billiard TV available on every Smart TVs worldwide

Watch any match, all tables, with a subscription to Kozoom: tv.kozoom.com 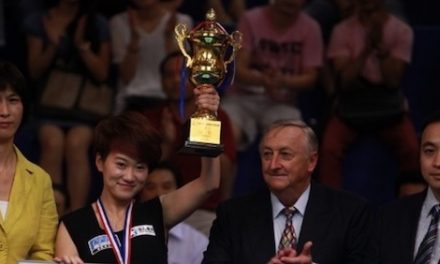 HANDS DOWN FOR HAN! 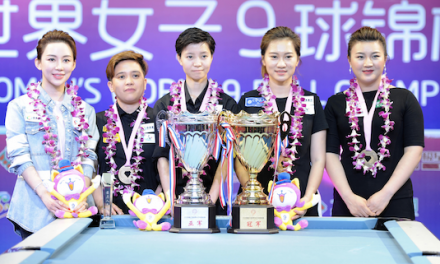 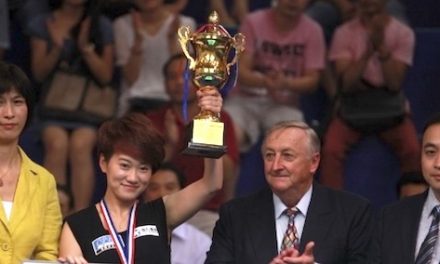 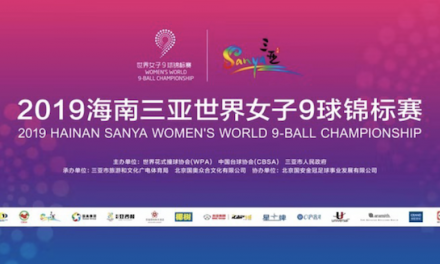