(Doha, Qatar)–After a week of what has arguably been one of the most highly competitive tournaments in World 9-ball Championship history, the field in Doha has been whittled down to what can only be described as the Fantastic Four. And if fans think the play so far has been more than stellar, wait until Thursday when action commences for the final sprint towards pool’s most prestigious prize.

No matter which of the four corners one looks, fans will see greatness ready to do battle. In one Semi-final, Austria’s Albin Ouschan, a runner up here in Doha two years ago, the current China Open champion, and  one of the planet’s best players,  will clash with Canadian-Filipino veteran Alex Pagulayan. Pagulayan, a true master of the game,  won this very event in Taiwan in 2004, and after fading away from pool for several years, has recently rekindled his love of competitive 9-ball. Proof of this came in the US where Pagulayan has won the last two Master of the Table titles at the prestigious Derby City Classic in Indiana.

In the other semi-final, the USA’s Shane Van Boening, a runner up here last year and a four time US Open champion, is streaking towards another  another crack at glory. But in his way stands Taiwan’s Yushuan Cheng, who currently holds the US Open crown and is playing absolutely dominating pool.

With this kind of talent level ready to square off on the final day, it might seem near impossible to predict who will emerge the king of 9-ball come Thursday evening. Certainly, however, one could easily make the case for the American Van Boening to be the favorite.

SVB came within of whisker of winning against Taiwan’s Ko Pin Yi last year. Since then he has continued to play top level pool in every single tournament he has entered.  The trajectory of his amazing career seems to be moving straight to the winner’s  circle of the World 9-ball Championship.

Except for one hiccup in the group stages, the 33 year old Van Boening has played impeccable pool this week. Today he showed  that he can handle any situation and any player. In the round of 16 the American found himself down 4-1 early  against Kuwaiti upstart Omar Al Shaheen. Unshakeable, Van Boening simply took his time, stayed in stroke, and flattened Al Shaheen, 11-5.

SVB would face a much tougher task in the quarterfinals against Greece’s Alexander Kazakis, who had just come off a convincing victory over China’s Chu Bing Jie in the round of 16. The two traded blows for over an hour with Kazakis always one step ahead of the American. Van Boening didn’t panic and took advantage of one mistake by the Greek to take his first lead at 8-7. Kazakis kept the pressure on but the four time US Open champion did the same, potting flawlessly on the way to a solid 11-9 win.

Afterward the low key American insisted he wasn’t feeling any pressure to take it one step further this year. It’s business as usual for him in Doha, albeit serious business.

“I fought my way through” Van Boening said. “I feel confident, comfortable. I know how everybody plays. Alex is a grinder, he likes to take his time. And I just do what he does and I play all the right shots.

“I’m just here to have fun. It’s not about the money. I’m just going to do the best I can. I don’t feel the pressure from American fans. I’ve won other tournaments, the World Cup of Pool, the World Pool Masters, US Open. This is just another tournament. “

Van Boening will need that no-nonsense steady hand when he goes up against Taiwan’s Cheng. After barely getting by the Philippines Lee Van Corteza in a hill-hill match in the final 64, the 28 year old Taiwanese has been building up a head of steam. Today he first took down China’s tough Dang Jin Hu, 11-8. In the quarterfinals he faced off against Estonia’s Dennis Grabe, who had just dashed the hopes of Great Britain’s Daryl Peach. Cheng put a quick stop to Grabe’s momentum, shooting lights out pool en route to a convincing 11-3 win.

Cheng is perhaps one of the least known superstars in a land of pool giants.  He has only been traveling and playing outside Taiwan for five years because his father, a school teacher, insisted that he study and finish college.  But when he swept through the US Open last year playing in dominating fashion, the pool world quickly stood up and took notice. Now, he feels confident that he can snap off another major.

“I know Shane is one of the best players,” Cheng said. “I just need to continue to break well and play my game, relax and not worry too much. The last three years here I lost in the final 64, all hill-hill matches. This year things are going my way so maybe tomorrow I can do what I did in the US Open. I wish I will have good luck.”

The other semi-final features the classic matchup between the young gun who has been knocking on the door of greatness, against the veteran ex-world champion traveling the long road back to redemption.

When Alex Pagulayan won the World 9-ball Championship in 2004, he was the insanely talented, wild and carefree clown prince of pool. Somewhere along the way the Filipino, who now represents Canada, lost interest in pool. He dabbled in poker, snooker and just enjoyed his life in various world locales.

Over the last two years, however, the 38 year old Pagulayan has rekindled his love of pool. Although he’s still quite irreverent, he’s also clearly matured. He is once again taking the game seriously.

The “Lion” was certainly all business today. He first took down Indonesia’s Muhammad Bewi, 11-7. Then he squared off against 21 year old Ko Ping Chun, the younger brother of 2015 World 9-ball champion Ko Pin Yi. The matchup between two of the games supreme talents from two different generations was everything it promised and more.

Ko raced out to a 5-0 lead but Pagulayan kept his focus and tied the match midway through. From there the two engaged in a brilliant battle of wits that went straight to the cliff. Tied at 10-10, Ko took on a long difficult cut on the 2-ball but missed by a thread. Pagulayan stood up and calmly cleared the colors to claim his first World 9-ball semi-final in 12 years.

Many moons ago, Pagulayan would have been boastful and brash. But age and experience has brought him a new perspective, one that could surely see the Filipino through to the champion’s podium once again.

“This is completely different than 2004,” Pagulayan said after his heart thumping win. “For some reason when I was younger I looked

for this kind of situation. Now it looks like I’m trying to avoid the pressure.  I just want to relax. But I love playing 9-ball again. It brings a lot of enthusiasm, inspires me a little bit. I’m just taking it one game at a time and don’t take it too seriously.”

He will, of course, have to take it deadly serious against Austria’s Ouschan. With his runner up finish here two years ago, his win at the brutally tough China Open, his successful Mosconi Cup appearance, and a slew of wins and top finishes in European events, the 25 year old Ouschan is surely playing his way into becoming pool’s new hardcore man. Steady, unflappable and just downright good, the Austrian would surprise nobody should he take the big cherry on Thursday.

Certainly his two opponents today would testify to that. Ouschan first grinded out a win against his roommate and friend, fellow Austrian Mario He, 11-9. He then headed over to the TV table to face the red hot Jayson Shaw, who had just come back from 9-3 down to barely defeat Ukraine’s Artem Koshovoj, 11-10.

That drama would prove the end of the line for Shaw as Ouschan pounced on several early mistakes by the Brit, then put the clamps on for a solid 11-7 win. The Austrian says he’s a different player and man from the one who finished second place two years ago. Not only does he have more experience, but he has his life together. He has, it seems, all the ingredients needed to win a world title.

“The difference now is all the tournaments I’ve played since 2014,” Ouschan said. “Maybe I’m a better player now. I practice a lot. I won the China Open last year. I become a father about a year ago. I played in the Mosconi. There’s many big steps in my life. I’m happy with all the things in my life. My baby is perfect. My girlfriend is perfect.  So probably I have a perfect life so that’s why I play almost perfect on the table.”
SEMI-FINALS, August 4, 11am Doha(GMT +3)
Race to 11, Alternate BreaK

The 2016 World 9-ball Championship is being hosted by The Qatar Billiard and Snooker Federation(QBSF), and is sanctioned by the The World Pool Billiard Association, the governing body of the sport of pool.

Up to date brackets and live scoring can found at this link:
http://www.online-brackets.com/view/user/wpc9ball/1010

Fans can interact with us through the WPA’s official Facebook Page for the event at this link;https://www.facebook.com/worldpoolbilliardassociation/ 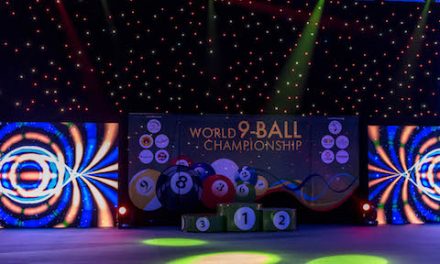 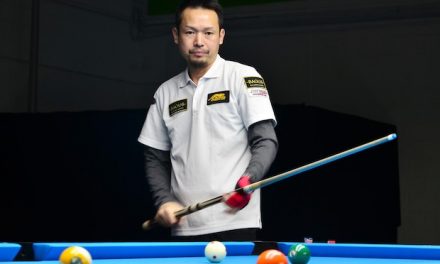 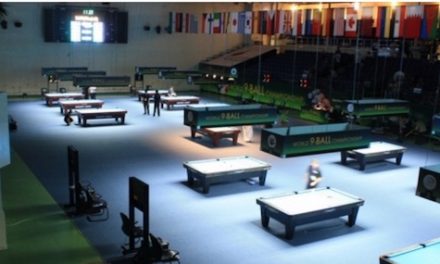 THE WOW FACTOR IN DOHA 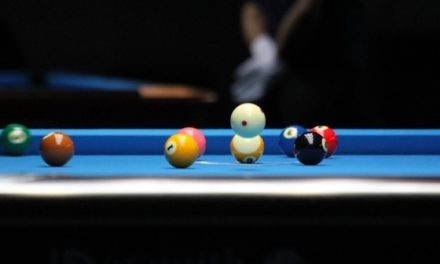 BREAKING TOWARDS SOME BIG TIME SHOWDOWNS