FOR FLAG AND COUNTRY

(Beijing, China)–It’s not often that the best pool players in the world perform their normally solitary craft as members of a  team. But this week in hot and muggy Beijing, we’re about to find out if the game’s top players  can coalesce with each other and around flag and country.

The 2012 World Pool Team Championship  got underway on Sunday inside the gymnasium of the Tongzhou Luhe High School, in the Tongzhou district of China’s capital, bringing together 24 pool teams from 23 nations(two from China.)  And if the results of day 1 are any indication, the early favorites are going to perform to expectation.

Great Britain, Taiwan, China 1, China 2, the Philippines and Japan all notched victories in their opening matches in the group stage, earning a valuable three points.  Only Germany fell short as they tied their match with Norway and settling for one point.

Germany’s dilemma highlights the most obvious theme here this week and that is; you’re only as good as your weakest link.  The teams consist of a minimum four person teams—“persons” being the operative word, because one player on each team must be a female.  That  is not to imply that women are weaker, hardly. But teams that you might think would be powerhouses, like Germany with Ralf Souquet, Oliver Ortmann, and Thorsten Hohmann are left slightly shorthanded because their female player, 19 year old Jasmin Michel, while a solid player in her own right, isn’t really close to the speed of say, Great Britain’s Kelly Fisher, China 1’s Pan Xiaoting, or China 2’s Chen Siming.  Although with short races and alternate break, anything is surely possible.

Perhaps a bit of a primer is in order because this tournament, while sure to be electric later in the week,  offers up a dizzying format that can appear quite daunting to sink your teeth into.

*The teams have been divided up into six groups, four teams per group.  Each team will play each other one time in the group stage(round robin format).  Each match between countries will feature the teams playing each other in a set of six matches, all alternate break;  two races in 8 ball, two in 9-ball and two in 10-ball.

*In 10-ball, the teams will play one mixed doubles match(scotch doubles),  race to 7, and one men’s singles match race to 7.

*The female player must play in the 10-ball mixed doubles match, and a 9-ball match.

*No player is permitted to play more than two matches per session.

*The team who gets the most wins in a particular set of six in their match with another country  will receive three points on their total in the group.  If the match is a tie(3-3),  each team will receive one point in their group.

*The two teams with the highest total points from each group will advance to the single elimination stage. In the event of a tie between  two teams, the team with the best win/loss record will qualify number one.

Are you confused yet? Well things will start to clear up once the tournament advances to the single elimination stage, which will play out like this;

Because this stage is a single elimination knockout, once a team reaches  a score of four wins, the match is finished. If a match finished tied at 3-3, the winner will be decided by a shoot-out. The shootout will work as follows;

The object ball(8-ball) will be placed in the middle of the foot rail at the same level as the first diamond. The cue ball will be placed on the head spot. Players have the choice to try and pocket the ball in either the left or right corner pockets. All players will play in sequence and the team to score six hits first with a margin of two or more(6-4, 7-5, etc.) will be the winner and will advance to the next round.

A similar tournament was held in Hanover, Germany in 2010 but in that case the teams were all men. It was won by Great Britain, when they defeated the Philippines in a thrilling final. So although this year’s teams include a female, we could say Great Britain is the defending World Team Champion.

The group stages of the 2012 World Pool Team Championship continues through July 3rd. The single elimination begins on July 4th. The finals will take place on July 6th.

Results from Day 1, Group Stages
Winner gets 3 points, loser none, tie gets 1 point 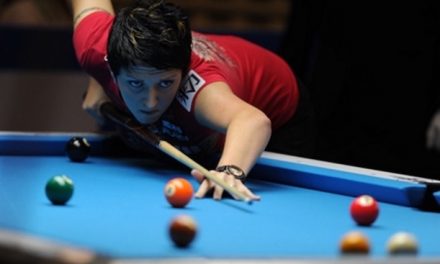 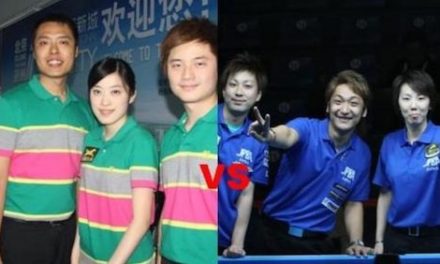 CHINESE-TAIPEI AND JAPAN TO BATTLE FOR WORLD TEAM TITLE 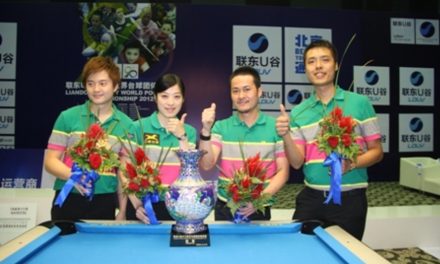 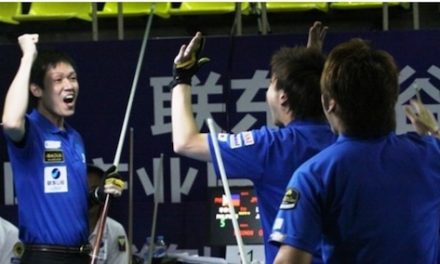 SHOOT IT OUT LOUD!