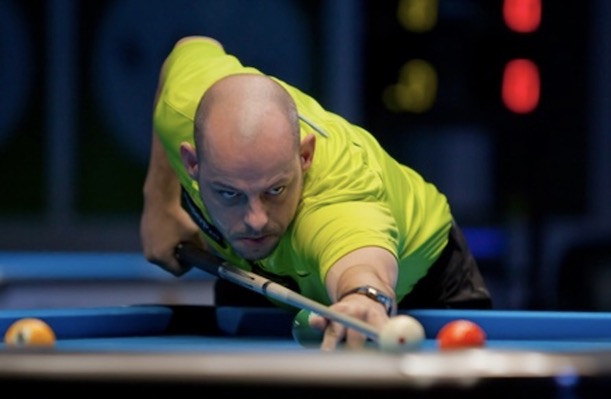 (Doha, Qatar)–For Darren Appleton, the plan today was simple. Quietly take care of business against Taiwan teenager Lin Cheng Chieh in their race to 9 match, and ensure a spot in the Final 64 knockout stage of the 2014 World 9-ball Championship, which begins here in Doha on Wednesday morning. That’s the money rounds, where guys of Appleton’s world class level make it all happen, where his run to a second World 9-ball championship would begin. The group stage? Well, that’s nothing more than a potential morass, a necessary evil where you try to get out of with your two wins as quickly as possible.

But right from the very beginning today nothing went Appleton’s way. The mop-top teen couldn’t miss and the Englishman quickly found himself down 7-1, a near impossible gap to overcome in an alternate break match. As he watched his plan fall apart, Appleton dejectedly knew he would have to come back tomorrow for another group stage match, one that could potentially dash all his high hopes for greatness this year.

But then slowly and surely, the 2012 World 9-ball champion clawed his way back. He soon narrowed the gap to two, then tied it at 7, as Lin wilted under serious heat from one of the world’s top pool players. Eventually the match went to the cliff with Appleton outfoxing the lad at the wire, 9-8.

Instead of the dreaded Judgement Day match in the group stage tomorrow, Appleton had made it through to the Final 64. As he packed up his cue, the change in his demeanor was priceless. 40 minutes earlier he cut a lonely, depressed figure in his chair. Now he was jacked to the gills, as if he’d been struck by an energizing bolt of lightning.

“The first part of the match he played unbelievable, perfect pool,” Appleton said.  “I’m already thinking about how I’m going to go practice my break later for tomorrow’s match because I’m sure I’m going to lose this one. But when I got it back to 7-5 I just started grinding it out. The last rack was serious pressure and my arm was shaking. Now I’m in the last 64, I’m in the money rounds. This is when it all starts. This makes me a dangerous player now because winning this match in the way I did is a big confidence boost.”

When Appleton says he’s got a serious confidence boost, the rest of the field better pay attention. But then, of course, the 31 other players who also qualified for the Final 64 today also all had that certain pep in their step as well, as they gleefully made their way out into the Doha heat. That’s because from here the path to greatness and glory is crystal clear; six wins to a world title. Catch a good gear, you become a legend.

There is, however, something about being tested early that energizes pool players in world championships. Defending champion Thorsten Hohmann slugged it out with Japan’s Tanaka Masaaki but closed the thriller with a break and run to advance 9-8.

Said the German: “I played good. He played good. It’s nice to have a match like that to go through to the Final 64. It gives you confidence. I played better in that match than my first match. I’m comfortable on the tables. I’m playing good.”

Yet another world champion, Mika Immonen, had a similar experience today. Down 7-3 to Korea’s Seung Woo Ryu, Immonen stayed focused and stormed back to win. After the match the Finn was brimming with confidence that he clearly can’t wait to try out when the Final 64 kicks off Wednesday.

“I had to dig pretty deep to win this one,” Immonen said. “When I finally tied it up at 7 that put all the pressure on him. But I kept thinking positive thoughts. It feels awesome. I didn’t want to play another match in the group stage tomorrow.”

Immonen revealed there’s a method to the madness of being tested sternly early in a big tournament and coming out the better for it.

“If I win the battle with myself I can win this tournament and that’s what I did today. It’s better that I had a tough match like this where I made a really good comeback. When I was in my prime in 2008 and 2009 when I won all those majors, I was being tested all the time. So it’s better to have a match like this. It helps put you in the groove and that’s where I want to be.”

A quick glance at today’s results from the all-winners side matches reveals that fans are clearly going to be in for a special few days of championship 9-ball as some of pool’s finest talents, both veteran and up and comers, found their groove and made it through to the Final 64.

Former World 9-ball Champion Wu Jiaqing(formerly Wu Chia Ching), hasn’t quite shown his amazing skill but he still managed his second straight win to advance today. China will be well represented in the knockout stage as Li He Wen and Dang Jing Hu and Wang Can had impressive wins.

Wang Can has emerged as perhaps the top dark horse in a field that is producing over a handful of them. Wang hasn’t been touched yet in this tournament, and fans in the arena and online speak of his talent as being in rarefied territory. His game and demeanor are absolutely rock solid and he seems poised to have a break out event this year in Doha.

The Philippines Johann Chua  looked marvelous for the second straight day today in defeating Taiwan’s talented Lo Li Wen.  After the match Chua, who won a spot in Doha only after winning a last minute qualifier, admitted his confidence is soaring as he is playing without pressure.

“There’s no pressure on me right now because I was supposed to be dead,” Chua said. “I got lucky to get into the tournament. In the qualifiers I was playing afraid and if I have a difficult shot I play safe because I don’t want to lose. But here in the main tournament since I’m not supposed to be here I just play loose. Instead of playing safe, I might go for the tough bank shot. So that’s my mindset. There no pressure. A lot of people don’t believe I can win this tournament. But for me I can win. I always have confidence.”

Other players flying under the proverbial radar and who advanced today include Austria’s Mario He, Great Britain’s Jayson Shaw, Japan’s Hijikata Kayato and the Philippines Elmer Haya.  The Philippines Carlo Biado, who perhaps is too well known to be a dark horse, also made it to the main event.

There will be plenty of drama at the Al Saad Sports Club on Tuesday as 64 players will get one last chance to qualify on what is affectionately known in the pool world as Judgement Day. Those lucky enough to emerge victorious will no doubt carry a confidence borne out of success in battle straight to the Final 64, where the slate is wiped clean and the path to 9-ball glory opens up.

The Qatar Billiard and Snooker Federation, which is once again hosting and organizing the World 9-ball Championship, will be providing free live streaming of the entire tournament on its website, http://live.qbsf.qa/.

The view the complete brackets for the Group Stages, please CLICK HERE 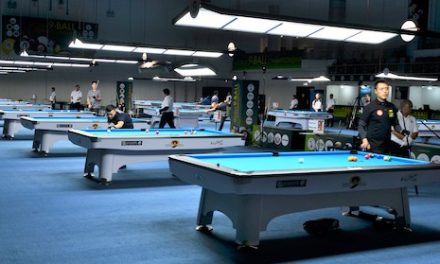 Van Boening, Other Top Stars Cruise On Day One In Doha… 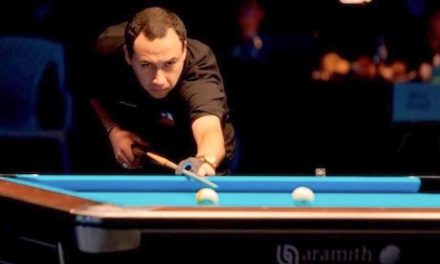 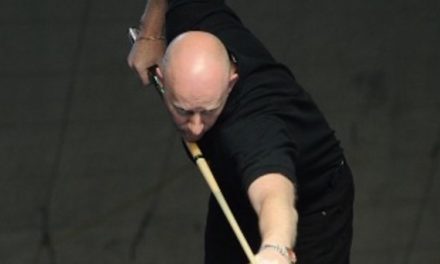 DAZLIN DARYL IS IN IT TO WIN IT 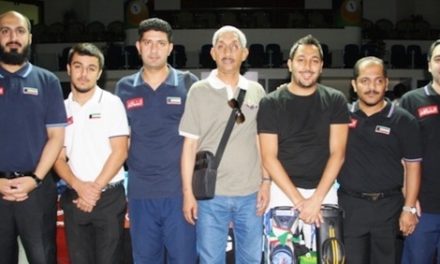